Minimum guaranteed income and social security: where are we?

Minimum guaranteed income and social security: where are we? 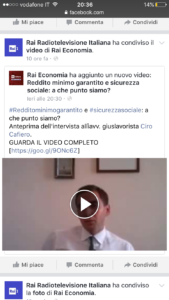 When we speak of guaranteed minimum income we mean that form of minimum income donated only to those of working age and with an amount that varies according to age, with the clause that the income available is less than a certain threshold considered of poverty. It is a medium that has spread mainly in Northern countries in Europe, exists in America. Europe in general has always been very sensitive to the issue of social security in which the guaranteed minimum income is registered: one of the clauses of the Treaty of Nice, art. 29., look at the principle of universalistic protection for the needy hardworking citizen who is in situations of non-income. This clause is echoed by the same treaty on the functioning of the EU which prevents any regression of protection in terms of social security, therefore with particular reference to the minimum guaranteed income. In recent years, according to many economists, despite this marked sensitivity towards social security, Europe has not produced the expected results. Some economists, united under the name of “Helicopter Money”, criticize the fact that Europe has shown much more attention to the allocations of funds in favor of the banks, the financial intermediaries, who in turn would have had to reinvest those funds in favor of the collectively to increase common welfare, ie spending, rather than towards the individual citizen. Thus, for example, the ECB, on the one hand, through Quantitative Easing, buys government bonds held by banks and injects cash into their coffers, on the other, it incentivizes them to put that liquidity on the market, making their immobilization inconvenient.

The “Helicopter Money” proposal is to move these resources towards social security financing projects, starting from the financing of the European minimum guaranteed income. Ambition shared also by the French “Nuit Debut” movement, which exploded in contrast to the recently approved labor reform in 2016. Unfortunately, the theme of social security in recent years in Europe has come up against the so-called austerity measures that Europe has had to adopt: they are unquestionable both at supranational and national level and as such they escape the balancing of the principles contained in the Nice Charter. , including those relating to social security. In this context, there is also a risk of retreating social security policies. It should be borne in mind that the Pringle judgment of 27 November 2012, C-370/12 recalled that the Mes (European Stability Mechanism) is an international treaty. and as such “immune” from the principles of the Nice Charter.

The minimum guaranteed income in Italy Also in Italy there have been numerous proposals for the introduction of the guaranteed minimum income, especially in recent times, given that many economists have recognized the need to introduce it as a consequence of the technological revolution which, they say, would have left many people unemployed. In reality it is a suggestion already known to our country in 1989 as illustrated by the famous Paolo Volponi in the book “The flies of the capital” dedicated to Olivetti. Italy has accepted the principles of social legislation with delay (compared to Germany itself which, in 1883, had entrusted the management of social insurance to the State thanks to Bismarck) and recognizes the citizen for limited periods and under certain conditions , the citizen’s right to income support, such as unemployment benefits. The social insurance system was born in Italy in the name of mutual aid companies (then regulated by law no. 3818 of 1886) or voluntary associations of workers, who shared the common risks within the community of the members (illness, accident , disability, but also unemployment, death, increased family load, etc.) in a logic of economic redistributive solidarity: limited to the group of individuals who responsibly contributed economically. Therefore, no form of state intervention and therefore financing from public finances was conceived.

What should the legislator do? The legislator, according to Avv. Labor lawyer and Collaborator of the Chair of labor law at Luiss Guido Carli, Ciro Cafiero, should move in our country in two different directions: -The first is to enhance the tools of workfare, that is, of those paths that give the right to the payment of a subsidy for a service performed for the community, on the basis of the model of socially useful workers, or, in the absence, of the participation in serious professional training courses. In this sense, one should not remain tied to the idea of ​​standard service but open up to the opportunities offered by the new market of services, in full expansion thanks also to the technological revolution. And this starting from the transport service of people and things on commission of an online platform. -The second is to make the so-called system effective conditionality in the context of the unemployment relationship, according to which the unemployed worker receiving a subsidy is entitled to it until he is offered a “reasonable” job or that, based on his skills, he can carry out.

THE OPTIMIZATION OF THE TAX LOAD AND CONTRIBUTION OF COMPANIES

interview with Avv. Cafiero at Centro Studi Management e Lavoro on the world of work, from new rights to corporate social responsibility