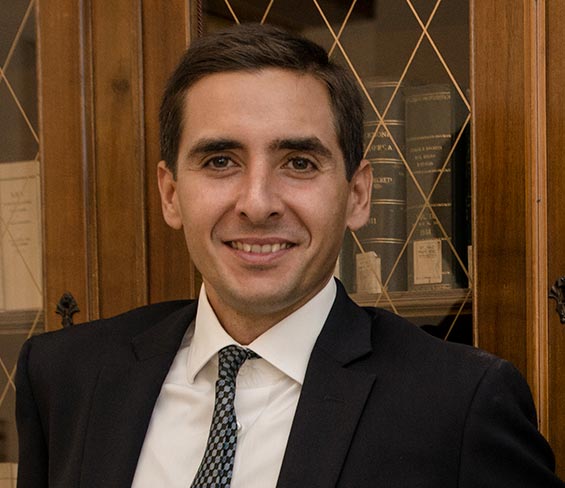 He is a lawyer of the Court of Rome.

In April 2016, he started with the lawyer Paola Pezzali at the Cafiero law firm “Pezzali e associati”.

He collaborated with the Martone & Martone Law Firm from 2008 until April 2016.

At the same university, he subsequently obtained a specialization diploma for the legal professions, forming with the judges of the labor section of the Court of Appeal of Rome.

He has gained experiences in the field of civil law and, in particular, of labor law and industrial relations. It provides judicial assistance and out-of-court consultancy in relation to every profile of the employment relationship, including management and public employment, as well as to every profile pertaining to the organization of work in national and international companies.

By way of example, it deals with the management of personnel, company or branch transfers, procedures for redundancy, ordinary, extraordinary and derogation, and mobility procedures.

Expert in industrial relations, he assists companies in the area of ​​corporate collective bargaining, also in the field of smart-working.

Expert work of the offices of direct collaboration of the Minister at the Prime Minister’s Office – Department for Family Policies.

He is the legal trustee of important production companies and various public bodies, including European ones.

In 2012, he was appointed expert of labor policies at the Ministry of Labor and Social Policies, in the offices of direct collaboration of the Deputy Minister.

He collaborated, as a labor lawyer, with the Governorate of the Vatican City State in the offices of direct collaboration of the Secretary General.

He is a president of ODV (voluntary organisations) of Terna Interconnector S.r.l.
He was legal adviser to the 12th Standing Commission of the Senate of the Republic.
During the Draghi Government he was an expert in the work of the offices of direct collaboration with the Minister at the Presidency of the Council of Ministers – Department for Family Policies.

In 2012 he worked in the Deputy Minister’s direct collaboration offices at the Ministry of Labor and Social Policies.

He worked in the offices of direct collaboration of the Secretary General at the Governorate of the Vatican City State.

Former holder of the didactic collaboration contract for the teaching of labor law and industrial relations at the Faculty of Economics of Luiss Guido Carli.

In 2015, he took up the teaching position at the National School of Administration within the negotiation laboratory

He is a professor of labor law at the Master in Anti-corruption (a new model of public ethics: legal responses and new protagonists) at the post-graduate university school of the Link Campus University

He is a professor of labor law within the Master in Strategies of energy management systems of the University of Rome “La Sapienza”.

He teaches at the CISL research and training center.

It carries out training activities for Assolombarda companies.

He teaches at the 1st level Master in “Artificial Intelligence: law and ethics of emerging technologies”, promoted by the Laboratory of Innovation Law (InnoLawLab) of the Law Degree Course of the European University of Rome, with the contribution of the Third Foundation International pillar and with the participation of the A. De Gasperi Foundation in Rome.

He taught for the Centesimus Annus Pro Pontefice Foundation

He is a member of the Catholic School of Higher Political Education promoted by the Jesuits at La Civiltà Cattolica (Community of Connections).

He is on the board of directors of Piccola Industria of Unindustria.

is part of the board of AIDP Lazio, as the  president .

He sits on the board of Vides, one of the largest non-governmental organizations promoting women’s employment in the world.

He is a speaker at international seminars. In 2016, he took part in the “Youth round table on technology, strategy and creativity: what is the recipe to shape the future of investments?  Who is going to benefit from the trust of the millennial’s generation? Where will you invest your savings in the future?” Promoted by the Saint-Petersburg State University of Economics in collaboration with Confindustria and Tim Wcap Accelerator.

He takes part in the debates organized by the Aspen Institute Italia.

He is a corporate partner of the American Chamber of Commerce in Italy, of which the Human Capital Committee is a member.

He has positions of responsibility in Unindustria, with particular reference to labor issues.

He is part of the advisory board of Geneva Macro Labs, a think tank made up of members of the ILO and the United Nations.

He is a member of the Executive Committee of the Italian Academy of the Internet Code.

He is a member of the International Chamber of Commerce (ICC) Working Group Trustworthy Technologies at the Paris office.

He is a member of the Advisory Board of “Laboratory of the Future, workshop of skills” at Alumni Collegio in Milan.

He is an expert in the work of the offices of direct collaboration with the Minister at the Prime Minister’s Office – Department for Family Policies.

He is a member of the Unindustria Technical Group “Labor and Industrial Relations”.

He edeted reviews for Civiltà Cattolica